Limitations of the Fourier Transform

My implementation of the Hilbert Huang transform (PyHHT) is quite close to a beta release. After nearly three years of inactivity, I’ve found some time to develop the PyHHT library in the last few weeks. In all this time many people have written to me about a lot of things - from the inability to use the module because of the lack of documentation, to comparison between the results of HHT and conventional time series analysis techniques. And now the time has come when I can no longer avoid writing the documentation. But as I write the documentation, I’ve found that I need to re-learn the concepts which I learned back when I started writing this module. It is out of this learning cycle that came my last blog post.

This blog post is the second in a series of posts in which I will discuss HHT in detail. (After all I’ve always thought that blogging is a lot more fun than writing documentation. This really doesn’t bode well for my software development habits, but here I am.)

Methods based on the Fourier transform are almost synonymous with frequency domain processing of signals (funnily, I once had a classmate who thought “Fourier” was French for frequency). There is no doubt about how incredibly powerful Fourier analysis can be. However, its popularity and effectiveness have a downside. It has led to a very specific and limited view of frequency in the context of signal processing. Simply put, frequencies, in the context of Fourier methods, are just a collection of the individual frequencies of periodic signals that a given signal is composed of. The purpose of these articles is to demonstrate how restrictive this interpretation of frequency can be in some cases, and to lay the groundwork for complementary methods, like the Hilbert spectral analysis.

This is not to say that Hilbert spectral analysis can in any way replace Fourier, but that it provides an alternative interpretation of frequency, and an alternative view of nonlinear and nonstationary phenomena.

Note: To run the code snippets on this page, you will need the PyTFTB module, which can be found here.

To begin with, let us construct a nonstationary signal, and try to glean its time and frequency characteristics. Consider the signal obtained as follows: 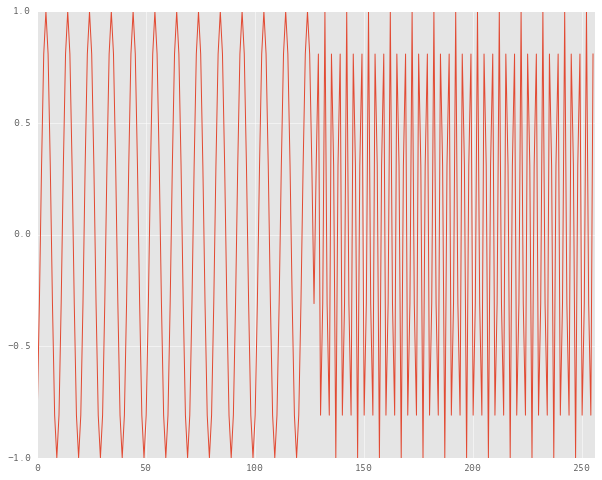 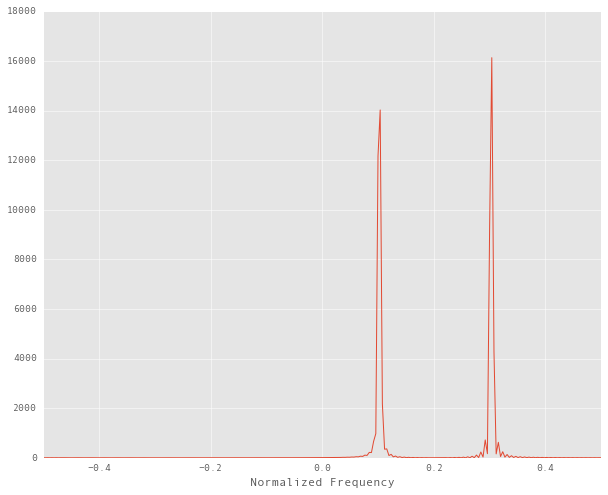 Note that the signal produced by the fmconst function produces an Analytic Signal. Analytic signals are complex valued, and by definition do not have negative frequency components.

A note on time-frequency analysis

The energy spectrum is perfectly valid, but the Fourier transform is essentially an integral over time. Thus, we lose all information that varies with time. All we can tell from the spectrum is that the signal has two distinct frequency components. In other words, we can comment on what happens a signal, not when it happens. Consider a song as the signal under consideration. If you were not interested in time, the whole point of processing that signal would be lost. Rhythm and timing are the very heart of good music, after all. In this case, we want to know when the drums kicked in, as well as what notes were being played on the guitar. If we perform only frequency analysis, all time information would be lost and the only information we would have would be about what frequencies were played in the song, and what their respective amplitudes were, averaged over the duration of the entire song. So even if the drums stop playing after the second stanza, the frequency spectrum would show them playing throughout the song. Conversely, if we were only interested in the time information, we would be hardly better off than simply listening to the song.

Time-Frequency representations of the signal

A popular choice to represent both time and frequency characteristics is the short-time Fourier transform (STFT), which, simply put, transforms contiguous chunks of the input and aggregates the result in a 2 dimensional form, where one axis represents frequency and the other represents time. PyTFTB has an STFT implementation which we can use as follows: 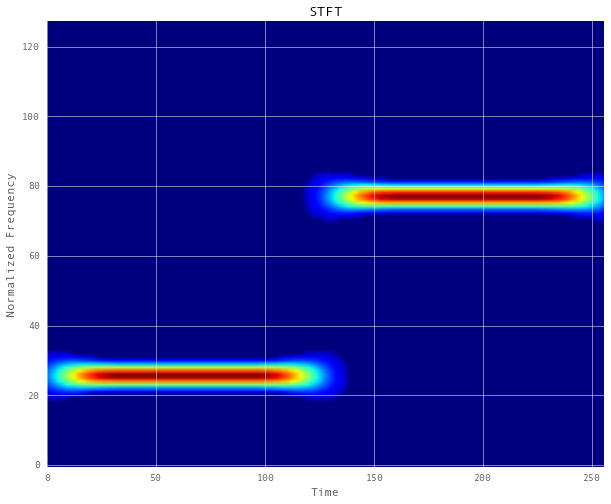 This representation is quite statisfactory. However, there are a number of reasons why it might not always work. The number of frequency bins increases from top to bottom and the length of the window function increases from left to right. Notice that the representation we are looking for is at the bottom right corner, obtained with 256 frequency bins and a (Hamming) window of length 65. Note that the PyTFTB implementation of the STFT is naive - the default number of frequency bins it uses is equal to the length of the input signal. We can, of course, specify a smaller number, but anything less than 256 would lead to a less than ideal representation. Moreover, these many bins sufficed in this particular case because the frequencies in the input signal are relatively low, in that a sufficient number of cycles can be accommodated within 256 samples. Also, the frequency components are sufficiently separated for the window function to distinguish between them properly. Thus, to find a suitable time-frequency for an arbitrary nonstationary signal, it is likely that we might end up searching the grid shown above, which is highly impractical.

As an example of how this approach can go wrong, take a look at the following signal:

This signal contains frequencies which are modulated such that they vary sinusoidally between 0.1 and 0.3. The time-frequency distribution of this signal should look somewhat like a sine wave. Here’s the spectrogram of the STFT of this signal: 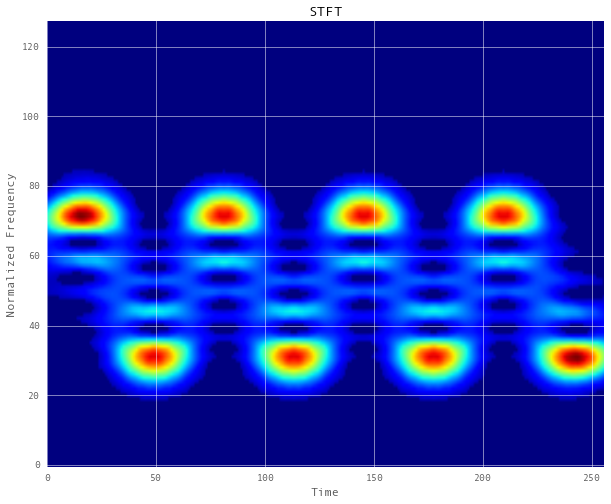 From this representation, the sinusoidal nature of the frequencies can be made out. And it also makes sense that the concentration of energy is the highest at the extrema of the sine wave. But the artifacts between the high energy areas are quite ambiguous, and bear little resemblance to the signal’s true characterisitcs.

Of course, there are a number of heuristics one can apply to make this representation more reasonable - like tweaking the parameters of the STFT, increasing the sampling frequency of the signal, or to use another time-frequency representation altogether. Unfortunately none of these methods are fully data driven, in that they rely very strongly on a parametric model of the data, and the representation is only as good as the model. A major drawback of time frequency distributions that depend on Fourier or wavelet models is that they don’t allow for an “unsupervised” or data driven approach to time series analysis.